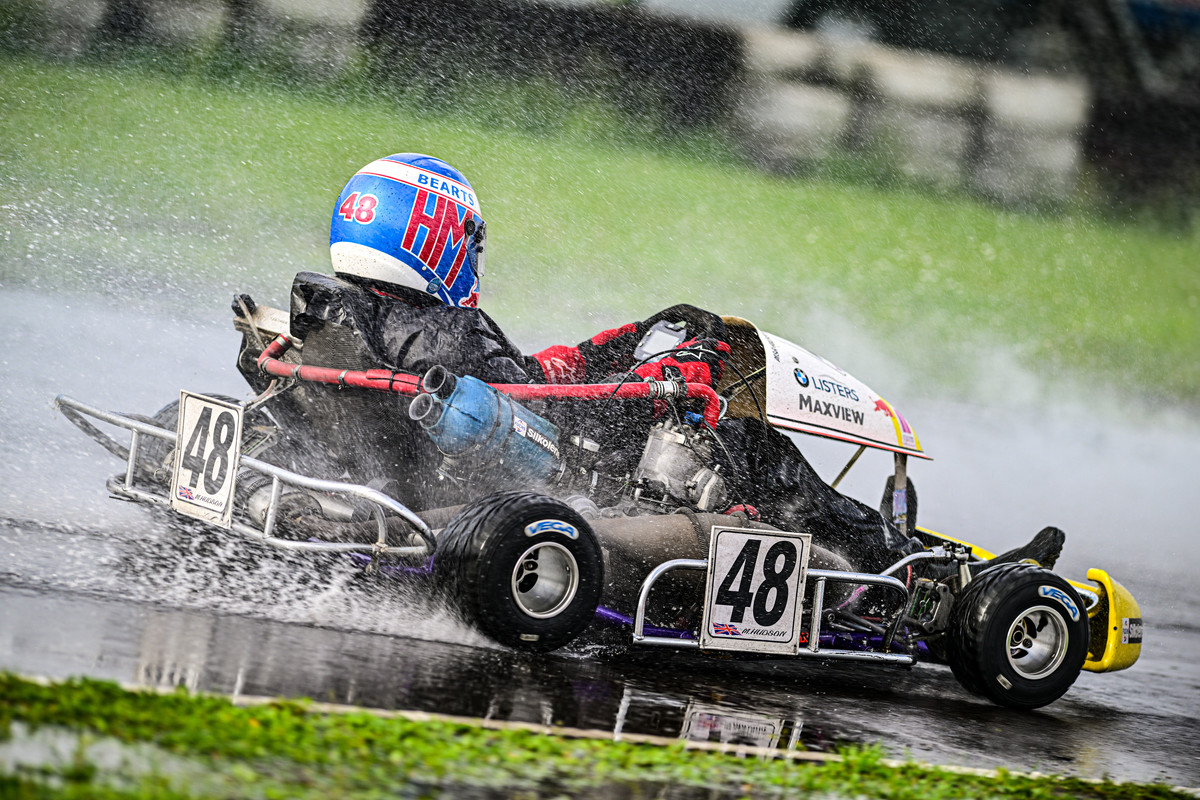 The EBC-Equipped racer had a turbulent final race in Lincolnshire

Marcus Hudson has been using EBC’s braking components as he competes in the 2022 series of the Northern Karting Federation Super 4 Championship.

With promising results throughout the year, the roadshow returned to a rain-soaked Fulbeck Kart Club in Lincolnshire recently for the sixth and final round of the season.

Hudson uses EBC Brakes’ Green kart pads and BF005.1 silicone fluid on his ABKC 250cc National kart. You can read how the weekend unfolded in his own words below.

“The rain was extremely heavy as we sat on the dummy grid ready to head out for Heat 1. We made a steady start going into the first corner because we weren’t sure how much grip we would have once we got there.

“Although the conditions were bad, they were still race able. After two laps, I moved up to 8th position; the kart felt great in the rain and I pushed, catching and passing 7th position.

“During the race, the rain felt even harder and the circuit was getting large rivers running through it. Down the straight, I was aquaplaning at 80mph. During this time, I had to back the braking off into the brake zones as the tyres were struggling to grip due to the aquaplaning. I still was confident and catching the karts in front. Into the first corner, the 6th position driver went off and I had another position.

“Everything looked good but halfway through that lap, the red flags came out stopping the race. I was disappointed as I was moving up the field and I knew on the lap into the pits that the position I had just made up was irrelevant as on a red flag as the results go back one lap, meaning the guy who went off kept that position meaning I finished 7th.

“Back in the paddock, the decision was made that we wouldn’t be racing. Fortunately, when the circuit said they were, the drivers that were going to lose out in the championship all of a sudden wanted to race! We stopped packing up and got ready for Heat 2. Due to a two-hour break for the weather, there was only going to be a further two heats and the points from the three heats would give you your final starting grid. This would also be the final results as daylight was diminishing.”

“It was still wet with slight showers. In Heat 2, we were running in 2nd,  pushing the leader in the corners and down the straight, but just couldn’t get by him. In the first corner, I went wide and went down to 4th. I was then battling with the 3rd position driver but just missed out on taking the position by less than a tenth of a second. We finished six seconds ahead of 5th.”

“The rain had stopped and the track was beginning to get a dry line on it.  On Lap 1, I got a great run on the kart in front onto the straight but his kart failed (ignition coil stopping the engine) and I hit him up the back and went underneath him, spinning him and myself around. I managed to keep the kart running but, in the crash, my steering column broke so I had no steering and had to retire from the race. This was frustrating as the kart was going very well and a podium finish was on the cards.”

“After the three heats, we would have lined up 7th on the grid which was also our finishing position in the final due to losing the daylight.”

“If we didn’t race as was agreed after Heat 1, we would have finished in 5th overall in the season standings, but eventually finished 8th. We will be pushing hard in the off-season to improve the kart ready for the 2023 season.