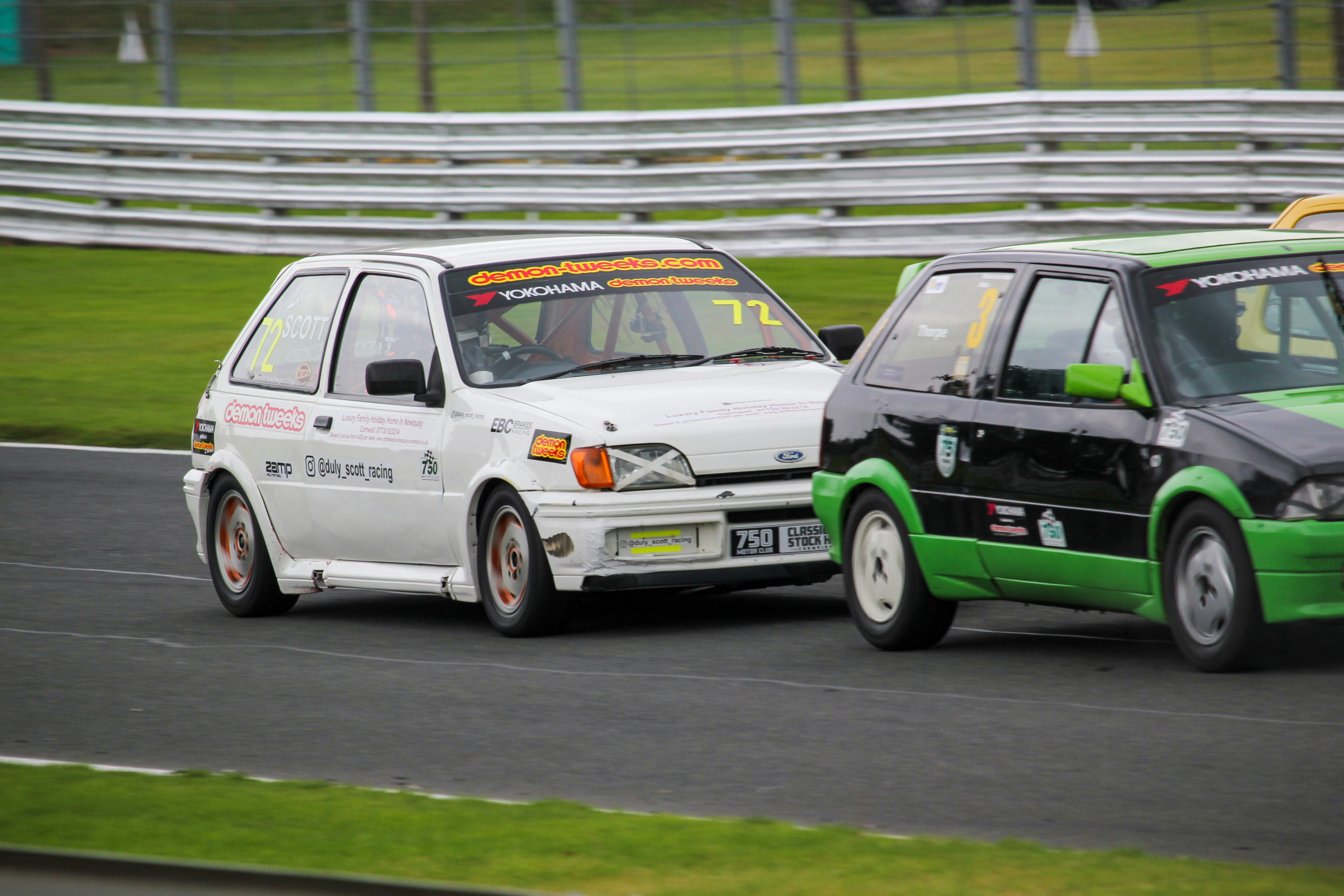 The 750MC Classic Stock Hatch Championship is a fiercely fought and great value-for-money race series that invites pre-1992 hatchbacks with engine capacity limits (up to 1400cc multi-valve and up to 1600cc two-valve-per-cylinder).

Essex-based Lee Scott and Alan Duly have both raced in the series for several years in their respective Ford Fiesta XR2i machines, under the ‘Duly Scott Racing’ team.

Both drivers proudly use EBC Brakes’ Bluestuff pads in their cars, which have helped them to numerous victories over the years.

Scott explains how the most recent race unfolded at Cheshire’s Oulton Park recently, in his own words below.

“A couple of weeks ago we were at Oulton Park in Cheshire.

“This was the first time we had been there as a championship for about 10 years, and even longer since we personally last raced there.

“We were both running the EBC Bluestuff brake pads on our standard brake discs (as is mandated by our regulations).

“Qualifying was our first time on the track in over 10 years. So, the first few laps were really a ‘learn and remember’ exercise for us; not just the corners, but how you can use the kerbs too.

“As is usual, the Bluestuff compound worked straight out of the paddock from cold, so we could confidently push the braking right from the off. It’s the grip to the track through the tyres which is more variable.

“Anyhow, qualifying went quite well with Alan starting in 22nd and me in 4th for race 1. For race 2, it was 21st and 4th respectively. Between us, we had the grid covered.”

“Alan made up about four places through the starting lap and I managed to get to 3rd off the grid to see if I could catch the leaders. Again, we had absolute confidence that the brakes would work from turn 1, and would continue to perform through to the 15-minute race time limit with no noticeable fading.

“The long International circuit at Oulton meant we would only get around seven laps, so no time to hang around. About lap 3, I was presented with an opportunity to go for a big move around the outside at turn 1. It was a risk, but it paid off in multiples; I’d gone from 3rd to 1st in one move. It doesn’t always work out that well!

“Anyhow, I managed to hold the lead to the chequered flag and even grab the fastest lap too for an extra championship point. Alan meanwhile had dropped one of his start lap gains and finished in 19th.

“Race 2 – I had a fairly good start from 4th, until I got to turn 1, where I went very wide, all four wheels on the grass (I mentioned earlier how it doesn’t always work out), which consequently dropped me down to 10th. I pushed hard to the end but was only able to recover back to 5th, but managed to gain fastest lap again. Alan again finishing in 19th.”

Connect with Duly Scott Racing for more news and information: